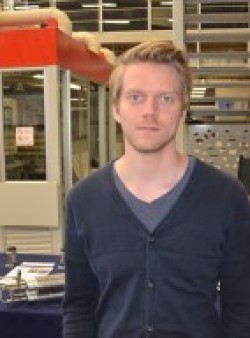 Kristian Kjær Justesen received his Master’s degree in Mechatronic Control Engineering in 2012 from the Department of Energy Technology at Aalborg University, Denmark. His Master thesis, which was made in cooperation with two other students, concerned dynamic modeling and control of a Reformed Methanol Fuel Cell system and won the award for best thesis at the department that year.
Shortly after finishing his Master’s degree, he started work as a Ph.D. Student at the same Department. His Ph.D. is a continuation of his work on dynamic modeling and control of Reformed Methanol Fuel Cell systems, but includes its integration in a hybrid drivetrain. The work will make it easier to design controllers that optimize the dynamic stability of fuel cell systems with integrated reformers and make them useful in more applications.
He is visiting HySa Systems for a 3½ month research visit, during which he will perform a series of experiments, in cooperation with researchers at the Institute.