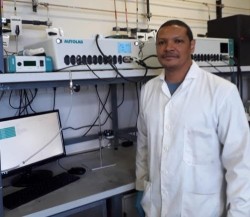 Dr Felix started his tertiary education at the University of the Western Cape (UWC) in 2003 and completed his PhD in 2013. He completed his post graduate studies at the South African Institute for Advanced Materials Chemistry (SAIAMC) based at UWC. His research area focused on catalyst development for polymer electrolyte membrane water electrolyzers (PEMWE) as well as membrane electrode assemblies for high temperature polymer electrolyte membrane fuel cells (HT-PEMFC). After completing his PhD, he pursued a career in industry and in 2018 he returned to SAIAMC where he is currently doing post-doctoral research in the field of nickel iron batteries and PEMWE. Dr Felix is also involved in the supervision of post graduate students at SAIAMC.