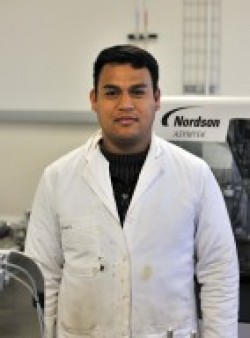 Wafeeq graduated from the University of Western Cape in 2005 with a BSc degree in Chemical Science and an Honours degree in Chemistry in 2006.  He then continued with his chemistry interests to complete a Master’s Degree with a thesis entitled ‘Consolidated Nanomaterials Synthesized using Nickel Micro-wires and Carbon Nanotubes’, for Sustainable Energy Technologies focusing on electrode development.  Following this, he started his PhD at the University of Western Cape in February 2009.  His PhD work was carried out in collaboration with the Institute for Energy Technology (Keller, Norway) which specialises in Hydrogen Storage Materials under the scientific consultation of Professor V.A. Yartys.

Dr. Wafeeq’s current work focuses on the preparation of Ti- based AB and AB2 type Metal Hydride Alloys for Solid-State Hydrogen Storage for stationary applications.  Ti– based AB and AB2 Hydride forming Materials have shown to be very promising Hydrogen Storage Alloys due to their (i) reasonable ‘reversible’ hydrogen storage capabilities at near ambient conditions, (ii) abundance and (iii) low cost.

South Africa has a worldwide dominating position in the production of Platinum Group Metals (PGMs) being the world’s largest producer of Platinum and the second for Palladium.  The country has also well-developed production sites containing other metals which are important components for Hydrogen Storage Alloys, such as Titanium, Zirconium; Vanadium; Nickel, Cobalt and Manganese.  Other important component metals are the Rare-Earth Metals although they are not being produced on a large scale.  These main advantages in South Africa make the activities focused on Solid State Hydrogen Storage solutions and related technologies utilising Hydrogen Storage Materials very promising.