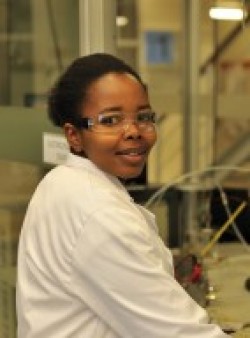 Her PhD work focuses on the Development of Low Cost Cathode Material that possesses high thermal stability and capacities for Lithium Ion Batteries for Electric Vehicles applications.  The focus of the study is on the LiNi1/3Co1/3Mn1/3O2 material due to its low cost, high voltage, rate capabilities, long life cycle and safety for use in Battery Electric Vehicles (BEVs).  This material was first proposed by Ohzuku et al. as a high voltage cathode material (discharging around 4.0 V vs. Li) with capacities greater than 200 mA h/g in the range of 2 to 4.6 V with negligible capacity loss.  The synthesis of LiNi(1-x-y)CoxMnyO2  compounds is usually carried out by a modified mixed-hydride approach, in which Ni(1-x-y)CoxMny(OH)2 reacts with Lithium salt in the air at high temperature.

To significantly enhance the production, physical and electrochemical properties, the cathode material may be modified by coating with a thin layer of inactive metal oxide, MOx.  The improved cycling performance and capacity retention of the coated material is thought to be successful in minimizing the side reactions within the battery by providing a protective layer between the electrolyte and the cathode during intercalation and de-intercalation processes.

Her work is carried out in collaboration with Bipolar Plate manufacturers including TEER Coatings Ltd, UK (part of Miba AG, Austria) who specializes in PVD coatings.

[1] International battery Association held in Cape Town at One & Only Hotel in 2011.