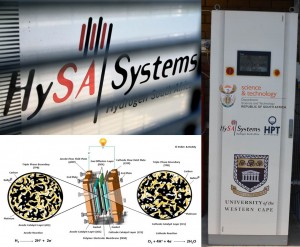 This prototype has been developed by Hydrogen South Africa Systems Centre of Competence (HySA Systems) in collaboration with Hot Platinum (PTY Ltd.) a local South African company involved in power management and control electronics. Both have been testing the unit at a building at the UWC Nature Reserve, with remarkable results. All electrical power used in the Reserve is generated from a bank of hydrogen cylinders connected to the HFC Power Generator – not from Eskom or the national grid. The cylinders deliver continuously hydrogen to the Proton Exchange Membrane Fuel Cell containing the precious metal – the Platinum catalyst (mined in North West province).

Director-General Mjwara emphasised the critical role of science, technology and innovation play in ensuring the development of this country. “We are currently facing a R60 billion deficit of which 10-15% pertains to procuring technology products from abroad. We need to look at ways to reducing South Africa’s dependency upon foreign goods. Locally, fuel cell electrode (also called Membrane Electrode Assembly – MEA) costs amount to R1,500, so if we assume that we can produce about a million units per year sold at R1,200 per unit that will result in a revenue of approximately R1.2 billion. We have the capacity in South Africa to achieve this.”

He further adds, “We talk a lot about adding value, reducing our carbon footprint, about access for all, creating wealth and developing private/public partnerships. This project shows that we are capable of all of these things.”

The HFC Power Generator unit uses hydrogen to generate electrical power, with only water vapour as the by-product, which means that electricity can be produced in an environmentally friendly way without pollution or noise. Furthermore, by using hydrogen, electricity can be produced in remote areas which do not have access to the electricity grid. The decentralisation of energy generation by using HFC systems is one of the few solutions that could potentially allow electricity access to communities efficiently and cost-effectively.

Professor Bruno G. Pollet, Director of HySA Systems Competence Centre, at the UWC said, “As we are all aware, South Africa, often seen as the ‘Powerhouse of Africa’ is facing major energy challenges. Planned outages, blackouts, energy shortages, high energy tariffs, years of underinvestment in power infrastructure and ’energy poverty’ in low income households are the main issues. To eradicate this, the South African government has rolled out several energy and energy efficiency programmes and initiatives such as HySA with an emphasis on alternative energy opportunities and off-grid renewable energy solutions.”

South Africa’s mineral resources amounts to approximately USD$2.5 trillion and is the predominant supplier of Platinum Group Metals (PGM) to the world, but not much beneficiation is currently undertaken in the country.  However, the rise of Hydrogen Fuel Cell Technologies (HFCT) in various markets is about to change the global Platinum landscape with the anticipated increase in Platinum usage in this emerging market. Thus it is safe to stipulate that if HFCT gains market share in coming years as is anticipated by the large vehicle manufacturers such as Toyota, Hyundai, Honda and BMW, then the PGM market will see profound and sustained growth.

Professor Pollet remarked that there were significant opportunities for South Africa to partner with international producers of fuel cells and that these partnerships had the potential to make the country an established global Hub for the production of fuel cell components and systems.

Notes to editors
1.    The Hydrogen Fuel Cell (HFC) Power Generator project is funded by the South African Department of Science and Technology.
2.    A fuel cell is a chemical device operating at various temperatures (up to 1,000◦C) that transforms the chemical energy of a fuel (hydrogen, methanol, natural gas etc) and an oxidant (air or pure oxygen) in the presence of a catalyst (e.g. Platinum) into electricity, heat and water.  Fuel cells are clean Energy Storage Devices (ESD) that have been used in space missions, generating power for probes, satellites and space capsules, and have been used to power vehicles and provide power in remote or inaccessible areas.
3.    In a bid to increase South Africa’s research efforts in Hydrogen and Fuel Cell Technologies (HFCT) and Platinum Group Metal (PGM) beneficiation, and to create manufacturing, job opportunities as well as Intellectual Property, the Department of Science and Technology (DST) developed the National Hydrogen and Fuel Cell Technologies Research, Development and Innovation Strategy (Hydrogen South Africa, acronym HySA™), a 15-year programme approved by the Cabinet in May 2007.
4.    The Department established three Centres of Competence under HySA™, which are hosted by the country’s leading universities and science councils.  The University of the Western Cape (UWC) is host to the Hydrogen Systems Integration and Technology Validation Centre of Competence (HySA Systems) located at the South African Institute for Advanced Materials Chemistry (SAIAMC).
5.    The HySA Strategy is being implemented in the context of the DST’s various innovation strategies, the Department of Mineral Resources (DMR)’s minerals beneficiation strategy and the Department of Energy (DoE)’s Integrated Resource Plan (IRP) and the Department of Trade and Industry (DTI)’s industrial development strategies. For further information about HySA, please visit: http://dx.doi.org/10.1016/j.ijhydene.2013.11.116
6.    HySA Systems and national/international partners have been responsible for introducing many Hydrogen Fuel Cell Technologies (HFCT) innovations, including (among others) South Africa’s first hydrogen-powered tricycle and scooter, first fuel cell component manufacturing line, first 2.5 kW fuel cell backup power system prototype for telecommunications markets, and a hydrogen-powered golf cart.
7.    Recently, a 3-year project was launched between Airbus, the National Aerospace Centre and HySA Systems aimed at gaining an understanding of how hydrogen fuel cells could perform over an aircraft’s service life while subjected to the harsh and rapidly changing climatic and environmental regimes that commercial jetliners operate in.